In a fit of feeling that perhaps we were, as a family, ignoring the wonders of steam we went to the Watercress Line’s ‘War on the Line’ event a couple of years ago. It’s one of the highlights of the year for the – ahem – army of re-enactors who spend their weekends in all weathers getting themselves all dolled up as servicemen and women and scaring small children with their impromptu renditions of Chattanooga Choo-Choo.

War on the Line is an annual weekend-long festival

The Watercress Line runs through four immaculately restored stations between Alton and Alresford in Hampshire and features a number of specialist events, from Thomas & Friends for the youngsters to real ale weekends for chaps with a fondness for sandals and facial topiary. Or maybe Inspector Morse. However, for one weekend each year the entire line is given over to the sights and sounds of the Home Front in 1939-45.

And I mean the whole line…

Now come on – you don’t see that every day 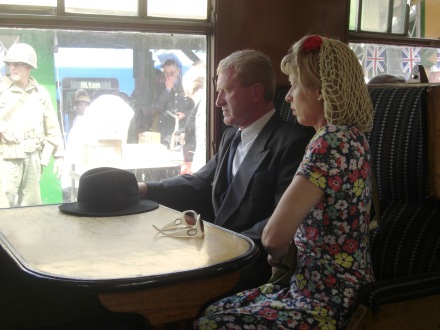 You never know who will be on your carriage

Once you’ve accepted that the 21st Century got left behind in the car park, things soon become startlingly normal, being back in the mid-1940s. One starts to wonder whether any of the people around you own a television. Or a pair of jeans. The thing is that after going to all the trouble of getting kitted out to the enth degree of accuracy, the allure of modern dress must dwindle significantly. 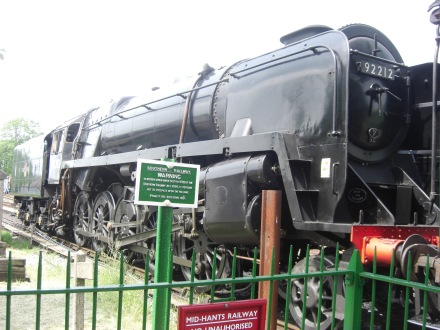 For one weekend a year, the trains are about the least historic thing on view

On our visit the American GIs were far and away the most numerous of all the social groups sculling around the Hampshire countryside. Perhaps it’s the desire to be over-sexed and over-paid, or the popularity of Saving Private Ryan. All that can be sure is that every member of the re-enactment congregation is casting an informed eye over their companions and quick to spot the slightest faux pas.

Lunch at the NAAFI wagon

Shopping for those essential little details or a whole new outfit

For anyone thinking of going to the Goodwood Revival, the dedication of the visitors to the Watercress Line is a salutary lesson. Not much here came from eBay or a joke shop. In fact one does feel a touch concerned in the summer sunshine that the pervading scent of mothballs might suddenly ignite into a ten mile long fireball… 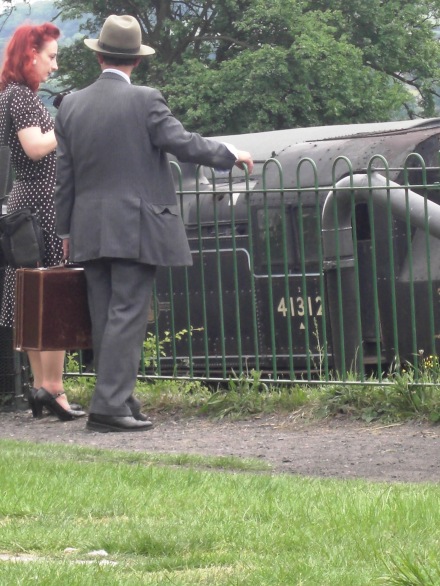 Spivs selling nylons and other black market goodies are popular

Going to an event like this and not being in period schmutter doesn’t feel altogether odd. Everyone’s just pleased to see you, delighted if you take an interest and getting on with getting on with their weekend. The Watercress Line is an astonishing venue because it filters out pretty well everything that you might expect of modern day-to-day life over such a vast expanse of this green and pleasant land. 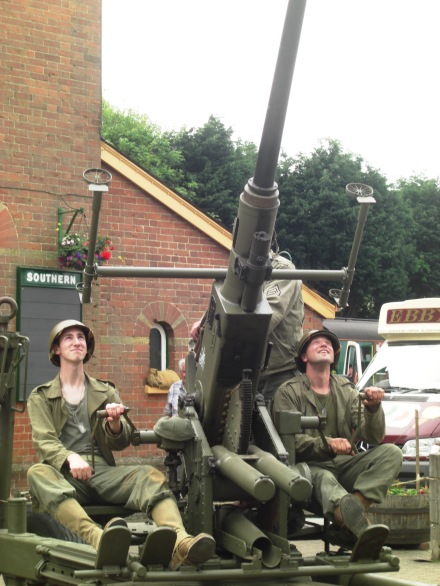 I don’t know where you get them from but, yes, I want one. 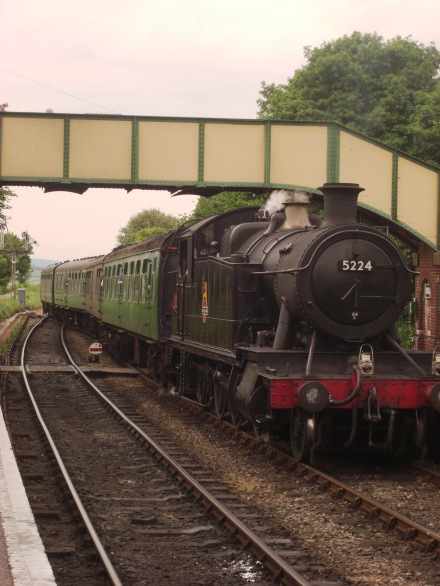 In case you were wondering, there are trains too 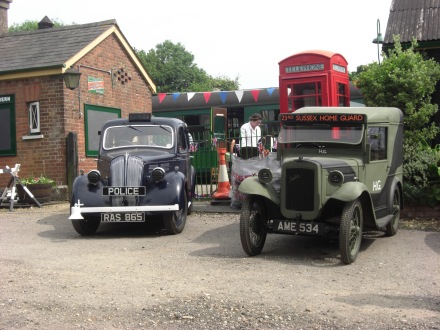 At every station there are things to see

It really is a fantastic day out, with not a stick-on moustache in sight. Why not pop over to the Watercress Line and book your tickets for this year’s show? You never know where it might take you…

The jitterbug club stops for tea

SAS call in for a cheap day return

Knackered WAAF takes time out at the end of the day

The birth of civil aviation after World War 1 was greatly assisted by the number of ex-military machines flooding the market and available for next-to-nothing. Types from the humble Avro 504k trainer to genuine fighter machines like the S.E.5a and Sopwith Pup were snapped up and flown privately, while larger reconnaissance and bomber types were put to work delivering mail and passengers.

Not until the late 1920s was a new generation of aircraft needed to replace these increasingly careworn machines on the grounds of maintenance cost if not outright safety or performance. The de Havilland company was at the forefront of light aircraft design with its Moth series, but rivals sprang up aplenty, among which was the Parnall Elf, designed by Harold Bolas and built by George Parnall & Co in their factory at Yate near Bristol in 1929.

The sole surviving Parnall Elf at its Old Warden home

Like the Moth, the Elf was a two-seat light biplane. Although relatively conventional in construction, with a wooden airframe and a combination of plywood and fabric covering, Bolas placed great emphasis on making the Elf user-friendly with inbuilt sturdiness, ease of operation and cost-effective maintenance.

Its wings therefore featured struts in the form of warren girders to avoid the requirement for wire bracing, which needed a seasoned rigger to maintain, and they could be folded for storage. They were also set well forward on the fuselage as a feature to assist crew escape in an emergency – still an extremely common occurrence.

The first example, later registered G-AAFH, was powered by a 105 hp Cirrus Hermes I four cylinder in line engine. It made its public debut alongside a number of new aircraft at the Seventh International Aero Exhibition at Olympia in London in 1929. The purchase price of the aircraft was between £875 and £890, depending upon whether the owner opted to upgrade to a uprated 120 hp Hermes II engine.

Orders were few and far between, however. Unfortunately the prototype received a less than glowing report when tested at Martlesham Heath, and although an Elf came fifth overall in a field of 88 in the 1930 King’s Cup air race, de Havilland was making headlines the world over with its Moth series, setting new world records in the hands of both men and women pilots.

The Elf was not a record breaker, nor was it ever intended or cleared to perform aerobatics. It was quite simply a touring aeroplane, intended to allow private pilots unruffled progress from A to B. With no great feats to add to its sales pitch, only two more Elfs were built, registered G-AAIN and G-AAIO, both fitted with the uprated 120 hp Hermes II.

Both the prototype and G-AAIO were destroyed in separate flying accidents during 1934, caused by the Elf’s reliance on a fuel pump rather than the simplicity of a gravity-fed system. This left G-AAIN as the sole survivor when it was bought by Lord Apsley at Badminton, who flew it until World War 2 and then put it into storage, emerging briefly in 1946 before being mothballed until the Shuttleworth Collection team restored it in 1980.

Today the Elf stands as a reminder of that gentler age and that while air shows thrive on high adrenaline there is always a place for a gentleman’s carriage of the skies.

A rare and graceful sight: the Elf in action

It’s rather a startling thought that one particular aircraft has been entertaining the nation for more than half a century as a relic of the last peacetime days of the 1930s. And yet there she is, the Shuttleworth Collection’s celebrated Gloster Gladiator, L8032, describing graceful arcs and sweeping climbs above Old Warden just as she has since 1960…

L8032 was the last Gladiator I airframe built from the initial order made in 1935. All the components were built in 1937 but not actually assembled until 1938. Like her sister aircraft from this final batch, now on display at the RAF Museum, the completed L8032 immediately went into storage as the more modern Hawker Hurricane monoplane and soon-to-arrive Supermarine Spitfire took precedence in Fighter Command’s attention.

In the autumn of 1943 L8032 was brought out of storage and sent to 61 Operational Training Unit in readiness for a new job with a film unit called Independent Producers, which was to use the aircraft to shoot scenes for a film of the book Signed With Their Honour. This was to be a ‘factional’ retelling of the story of 80 Squadron and its Gladiators which fought to the last man and the last aircraft in the retreat from Greece and Crete in 1941.

At home at the Shuttleworth Collection’s airfield, Old Warden

Remarkably, all three complete surviving Gladiators – including The Fighter Collection’s N5903 – had an active role to play in the movie and were assigned to 61 OTU while the film was made. Two Gladiators were lost in a mid-air collision during filming but the survivors completed their tour of duty as stars of the silver screen before being mothballed once again.

L8032 would emerge once more in 1946 when she was put on display in Hyde Park. On 16 March 1948, L8032 was struck off the RAF’s charge list and bought back by the Gloster aircraft company along with N5903. Clearly the ailing Gloster company had no real idea what to do with these old machines and in 1950 both the Gladiators were delivered to Air Service Training for use as instructional airframes at Hamble and Ansty.

When RAF Ansty closed the two old aircraft were bought by Viv Bellamy for a nominal sum and L8032 was restored to flying condition using the engine from N5903 and the civilian registration G-AMRK. In 1956, Gloster decided that it wanted its aircraft back again and bought them from Bellamy, refitting L8032 was in full military specification and painting her in 72 Squadron markings, albeit with the fictitious serial K8032.

When Gloster Aircraft finally closed for business at the end of 1960,  L8032 was presented to the Shuttleworth Collection for safe keeping – and has remained there ever since. After many years of service she was completely overhauled in 1990 and repainted in a camouflage scheme of 247 Squadron, the only Gladiator unit to take part in the Battle of Britain. She wore these colours until 1996, when another new skin saw her returned to pre-war silver in hue – albeit in Norwegian markings for another film appearance.

Ready for another season in 2013: one of the longest-serving display aircraft in the UK

Finally in 2007 L8032 re-appeared in the colourful blue and yellow flashes of K7985, a 73 Squadron Gladiator that was flown with memorable vigour by the future WW2 ace ‘Cobber’ Kain at the 1937 Hendon Air Pageant. It is these colours which she carries to this day, and which are about to be replicated by a new model kit by Airfix.

The Scarf & Goggles proudly salutes this fine old girl and all who care for her. Here’s to another 50 years in the air over Bedfordshire…